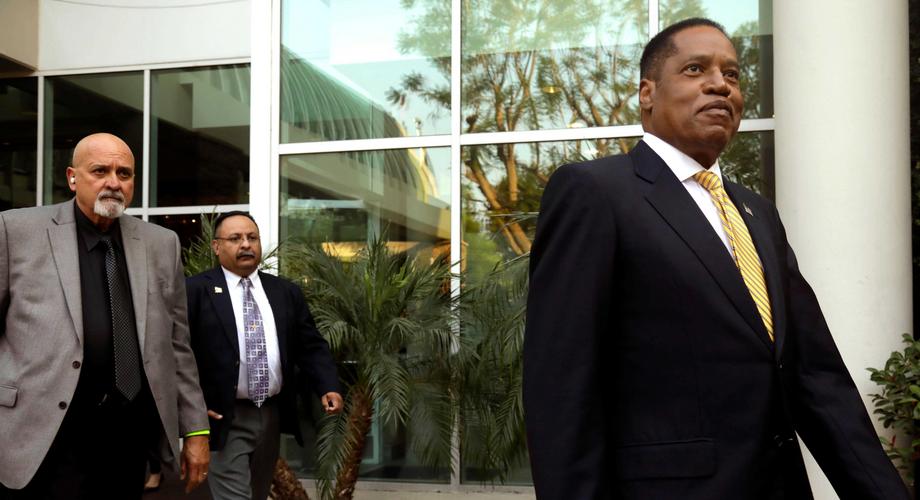 Datig said she decided to file a formal report after Elder publicly denied an incident where he brandished a gun at her. She also revealed other abuses by Elder, including being pressured to have an "open relationship." See more stories on Insider's business page .

It was reported last week that Elder had brandished a loaded gun at her in 2015 , which led Datig to break up their engagement. Datig told Politico that she decided to file a report with the Los Angeles Police Department (LAPD) after Elder publicly denied the incident. She told police that she had received threats after his denial.

In a tweet , Datig said "I'm not the one who has to come clean about my past. Larry is!"

Her police statement - which she shared with Politico - revealed details on how Elder had checked to see if the gun was loaded in her view while the two were in an argument.

"He proceeded to open the drawer and reached inside for his .45 caliber revolver. Making sure the firearm was in my view, he opened the cylindrical, rotating part of the revolver checking to make sure the gun was loaded with cartridges," she said in the statement seen by Politico.

Her statement also revealed other abuses by Elder, including being pressured to have an "open relationship," and "unwanted sexual activity," reported Politico, with Datig saying she rejected his advances.

The LAPD confirmed it was investigating Datig's claims, reported the Los Angeles Times , but could not provide details for now.

Elder responded to Datig's claims by releasing a statement through his campaign.

"I have never brandished a gun at anyone. I grew up in South Central; I know exactly how destructive this type of behavior is. It's not me, and everyone who knows me knows it's not me," the statement said .

"These are salacious allegations," he continued. "People do not get into public life precisely because of this type of politics of personal destruction. I am not going to dignify this with a response - it's beneath me. While my opponents and the Newsom campaign would love to keep voters distracted, I am going to stay focused on the issues that inspired 1.7 million Californians to petition for this recall."

The radio talk show host sparked controversy last week after comments he wrote in his 2002 book "Showdown: Confronting Bias, Lies, and the Special Interests that Divide America" resurfaced arguing that women should disclose pregnancy plans to their employers. When asked by the Associated Press last Wednesday if he still stood by what he wrote, he doubled down on his statements, saying the "government should not be intruding into the relationship between employer and employee."

Elder is running in California's gubernatorial race to recall Gavin Newsom. Voters head to the polls on September 14, and polls currently show Elder in the lead to replace Newsom as governor.